Today is the feast of Saint Matthias. The one and only connection I have to him is that, every Tuesday, I preside over three short liturgies in St. Matthias Chapel on the campus of a local school. Those three liturgies are the extent of my formal responsibilities as chaplain. The school was originally founded by an early Episcopal bishop as a religious boarding school for girls, and is now a formally independent co-ed day school, but has retained the tradition of weekly chapel services. 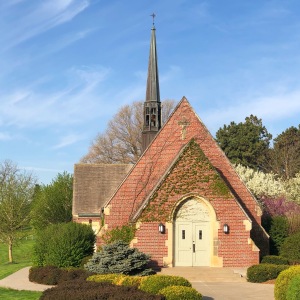 It’s a somewhat unusual arrangement. The school has no formal relationship to the Episcopal Church, and religious identity or education are not part of its mission or self-understanding. And yet, every Tuesday, the entire student body processes into St. Matthias, says a few prayers, sings a few hymns, reads a short passage from the Hebrew or Christian scriptures, and hears a brief homily from me.

The school is religiously diverse. There are Christians of every imaginable variation, as well as Hindu, Muslim, Jewish, and religiously unaffiliated students and families. Given this diversity, I do my best to select scripture readings and craft homilies that focus on universal or widely shared beliefs and values, while being clear about my own beliefs as a Christian priest, since that is all I can authentically claim to be.

I don’t know why the school’s founders and early leaders chose the name St. Matthias for the chapel. It’s not a common name for churches, and there is very little in the Bible about him. Mostly what we know is that he was chosen by the original apostles to take the place of Judas after Jesus’ resurrection and ascension because he had accompanied them “during the whole time the Lord Jesus had lived among us” (Acts 1:21). His main qualification, then, seems to be that he was persistent in showing up with and for Jesus.

If that’s the case, then St. Matthias seems like a perfect name for the chapel, given its current role in the life of the school. Mostly, what I do on Tuesdays is simply try to show up with and for the community in the best way I can. Because I’m only on campus for a few hours every week, I never quite know how, if at all, chapel affects anyone. Many of the students seem deeply engaged, many others seem to politely tolerate it, and a few bear the unmistakable look that the old religious guy is wasting their time.

But the thing is, regardless of how any of it is received, I really love being there. In fact, I really love them. Being the chaplain has given me a small glimpse into the inner workings of a school, and I’m in awe of how demanding the life of such a community can be, and the level of passion and commitment the faculty and staff bring to their craft. I see the ingenious way a lower school teacher can balance the nurture young kids demand while pushing them toward excellence and expecting them to bring their very best selves to the classroom each day. I see the high school teacher whose “I’m this close to losing it” tone with a group of unruly seniors provides only a thin veil for his deep affection for them, even when they are at their worst. I see the middle school teacher who walks slowly smiling through the halls, unphased even as a swarm of seventh-graders buzzes around her.

The work that happens there every day is what I can only describe as holy. Not everyone at the school would use that language, but it’s what I come back to over and over. It represents human beings at their very best, sacrificially offering their highest efforts for the sake of a higher good: forming the next generation of adults who will steward and care for the world and its people. I’m not sure there is much I can add to that with a few, twenty-minute chapel services each week, but I’m grateful for the chance to keep showing up.

It’s oft-repeated among clergy that ninety-percent of ministry is just showing up. From what I can tell, that’s the whole basis for St. Matthias’ apostleship: he just showed up to be with and for Jesus. I hope that the school community will keep inviting me to show up to be with and for them. I hope that, if nothing else, I can bless the holy work they all do teaching and learning. Most of all, I hope that all of them will know that, in the face of how fast things move and how hard it can all be, they are loved, they are more valuable than they can imagine, not because of how good they are (though they are certainly that), but simply because of the holy endeavor they are offering themselves to.

Those few hours with St. Matthias every Tuesday have served to reshape my imagination about much of what I’m doing leading a cathedral the rest of the week. Whatever else I may or may not bring, the most valuable thing I can do is to show up, to be with and for the people who make their home there, to pronounce God’s blessing on their joys and struggles, to remind them they are, more than anything, beloved of God, accompanying them, like Matthias, as best I can during the whole time I’m given to live among them.